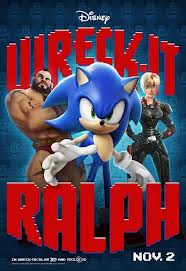 Hi, I’m Sonic, and I appear in the movie for TEN WHOLE SECONDS!

Okay, jokes over. If I was Sonic, I would be much more worried about finding a girlfriend than writing a blog about movies. One really bad segue later, we’re talking about ‘Wreck- It Ralph’. You know, I’m starting to think that somebody got the labels wrong. Surely ‘Brave’ is the Disney movie and ‘Wreck-It Ralph’ is the Pixar movie. But as we see in the movie, labels don’t matter. It’s what you do with what you are given that makes you who you are.

Wreck-It Ralph (John C. Reilly) is the bad guy of the Arcade game Fix-It Felix Jr, where Felix (Jack McBrayer) has to fix a building that Ralph keeps wrecking. After 30 years, Ralph starts to get tired of playing the villain (Just ask Ralph Fiennes. When was the last time he played the hero?) and goes off to win a medal. He goes to a game called Hero’s Duty, where he runs into Sg. Calhoun (Jane Lynch). He gets his freakishly large hands on a medal, but finds himself trapped in Sugar Rush, a candy themed go-kart game ruled by King Candy (Ed Wynn I Mean Alan Tudyk). In this game, Ralph finds himself sympathizing with a girl named Vanellope (Sarah Silverman) who is a glitch.

Okay. So what’s good about this movie? Well, the first act of the story is filled with plenty of gaming in-jokes, while the remainder focuses on the relationship between Ralph and Vaneloppe, both of which are very sympathetic. Ralph is a very relatable character, as we’ve all felt the need for a little recognition. The world of Game Central Station is very cleverly put together. And there are actually a lot of tear jerker moments later on. I think the biggest problem that the movie has is the third act. It’s not horrible, but it feels a little flat considering how strong the first two acts were. Also, Felix and the Sergeant seem to be mostly filler. They also have a romantic subplot that I didn’t really care for. And am I the only one who thinks that Felix and the other characters from his game should join the Jerk Club? Seriously, they know that Ralph hasn’t done anything wrong, why do they hate him? Just sign in with Mildew from the HTTYD series. (Yeah, I watch that. So?)

Maybe I’m looking way too deep into this. Yeah, there are some things like that, but overall, I think you might like to give this one a chance. Oh, and if not for anything else, you should see this movie just for the short that appears in the beginning. It’s really cute.