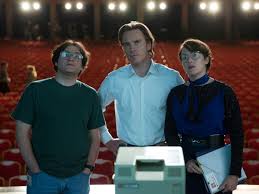 Okay, okay, okay. Let’s get to business. I don’t hate this movie. I don’t even dislike it. I think it’s a good film. I’m just saying that there are plenty of other movies this year that had more going for them. This movie seems like a typical Oscar movie. And I know it breaks a lot of typical biopic rules, but for some reason it never seemed that different to me. Maybe it’s just hard for me to get into biopics. (The only one I can think of that I really loved was Amadeus, but then again it’s not exactly fair for me to compare every biopic to Amadeus.)

I recently saw The Social Network, and I would probably also give it 4 stars. (I know i’m going to receive so much hate for that, but hear me out.) Everybody says that Aaron Sorkin is one of Hollywood’s greatest screenwriters. Personally, I think that he’s wonderful when it comes to dialogue, but with story, he’s not as good. I walked out of both Steve Jobs and The Social Network thinking, ‘well that had some great dialogue, but what was the movie ultimately trying to say?’ There didn’t seem to be an underlying message in the film that made you think. Both movies just told you about stuff that happened but had some great dialogue and good acting.

Speaking of acting, there’s some great work here from both Fassbender and Winslet. I’m not sure either one is a ‘winning’ performance, but I think a nomination is assured in both cases. Jeff Daniels is also very good. Directing wise, Danny Boyle is a guy I have a sort of love hate relationship with. Here, his direction is good, but not really that noticeable. This is a case where the movie basically hinges everything on the script and the actors. (In fact, this movie could easily have been a play.)

I can’t think of anything that this movie really got wrong, but it seems to me that I can think of at least 7 other movies I’ve seen this year that have more to offer than Steve Jobs. But don’t take it personally if you really liked it, because it is a good film and I can kinda see why some people love it so much. And I think it’s the kind of film that will make Oscar voters bite. Just don’t expect me to vote for it.