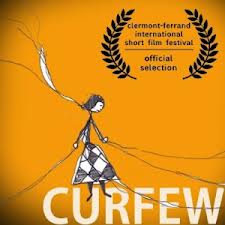 Well, we’re almost done. Just a few categories to go. Well, if anybody knows about where you can see some of these nominees online, that’d be fantastic. But as of now, I’m just going to have to take a blind stab. Let’s have a gander at Best Live-Action Short

The first nominee is Asad. (Sounds like a medicine for stuffed up noses) It’s about a fisher boy who lives among pirates and.. holy cow! According to Wikipedia, the short has already won thirteen awards from different film festivals, including Tribeca and Los Angeles. Hmm, it’s in a good spot, but let’s look at some of the other nominees.

In Buzkashi Boys, a boy named Ravi is expected to take on his fathers title of blacksmith. While not as well received as Asad, this short has been praised for it’s cinematography. You can argue that the similar topics on both films could cause vote-splitting. Well, one thing that’s for sure is that this movie is unlikely to win.

I think that the probable win is Curfew. The film focuses on Richie, who cancels his suicide to babysit his niece Sophia. So how many awards has this film won? THIRTY-SEVEN? Yeah, this totally looks like the frontrunner. Not to mention the fact that it’s the only american short film on the list. From what I can gather, it’s pretty darn good and emotional, which is exactly what the voters of this category usually go for

But if they want to vote for something visually interesting, Death Of A Shadow may be more up their alley. From what I can understand, it involves a universe where shadows exist separately from their owners. For me all it really does is get me hyped up for 2013, when DreamWorks Animation will release Me And My Shadow, a film with the same basic premise. As for this short, it only has three awards under it’s belt. But don’t rule it out entirely.

Our last nominee is Henry. Unfortunately, the Wikipedia article has absolutely nothing on this movie other than the fact that it’s an Oscar nominee! Although I do hear that the film has remarkable similarities to Amour, and I think that a film so dull that even every plaigarist’s best friend has nothing to say isn’t gonna win an Oscar any time soon.

Will win: Curfew
Runner Up: Asad
Should Win: I gotta see some of these movies.