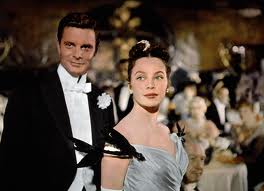 As I stated in the last review, some people like a good war movie, and I don’t. But one thing I love is a good musical, and with Gigi, Vincente Minelli (director of An American In Paris) directs an uplifting, feel-good story with some catchy songs to boot.

Gigi (Leslie Caron) is a schoolgirl who lives with her grandmother and visits her aunt every Tuesday for etiquette lessons. Gaston Lanchaille (Louis Jordan) is a rich aristocrat who has become bored with luxury {Gosh it disturbs me to see you, Gaston, looking so down in the dumps.} The two know each other as friends, but as time goes by, Gaston starts to wonder if Gigi could be something more.

First of all, this film is beautiful. The production design, score, and especially costume design are so colorful and memorable. I love the dialogue, the acting is great, and the editing works fine enough. As for the songs, they’re nice to listen to. Sure, it’s no Wicked, but the film does what a musical is supposed to do, and while it won for its title song, I personally prefer ‘I Remember It Well’.

I heard someone review this film and say they didn’t like it because it felt more like a Disney Animated film than your typical musical from this time period. While that’s true, you have to remember that Disney Animated films are really good. This film is very underrated, and I love the characters, especially Gigi’s grandmother and aunt. And Gaston is certainly more likable than his Disney counterpart.

Gigi is not a perfect film, if such a thing exists. The age difference between Gigi and Gaston is even more noticeable than the one in Silver Linings Playbook. And there’s also a narrator who seems to acknowledge the audience a few too many times, while also existing in the story as a definite character. I kept expecting a character to look at the camera and shout ‘Get out of my house, you creep!” But if you can look past its flaws, Gigi is a brilliant film. I love when I come across a feel-good film in the mix of all this drama, and this one is certainly up there.