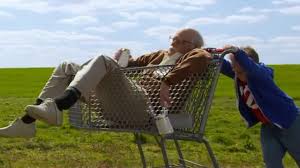 As anybody who lives in the US knows, it’s been awfully cold lately, and a lot of people have been getting sick. Today I wasn’t feeling so good and my mom told me I could get something from On Demand. Being sick, I didn’t want to watch a serious Oscar contender, I wanted to watch something fun. And that’s where Jack@$$ Presents: Bad Grandpa comes in. And yes, I’m spelling it like that.

The plot is simple. Irving Zisman (Johnny Knoxville) is taking his grandson (Jackson Nicoll) on a road trip so that the boy can live with his father. What I found interesting was the fact that the whole film was shot with hidden cameras and that a majority of the people in the film had no idea that they were being filmed. This isn’t like an ordinary movie. It’s not trying to say something deep or create a lasting impression on you. It’s just trying to be fun.

And you know what? Mission accomplished. While the opening scene did seem a bit too far, for the most part, the humor comes from the other people’s reactions, going to show that sometimes, truth is sillier than fiction. The highlight for me is the sequence where Irving tries to ship his grandson through the mail. The reactions from the delivery people are just priceless.

One thing I like is the subtlety of the story. If you squint, you can find actual interesting drama. It’s not given much focus, but it’s hinted that Irving, even with his naughty behavior, is actually much more suited to look after Billy than his actual father. While the father only wants the kid for reasons of money, Irving actually does care about the kid, and does try to do what he thinks is best for him, even if that isn’t correct.

The makeup effects on Knoxville really surprised me. I mean, this makeup was made to fool real people, and I know it could have fooled me. And yet there is a certain element of humor to the design, that seems just a little bit cartoony and off, which works.

I’m not going to act like the film was perfect, or even worthy of Oscar Consideration (apart from makeup) But you know what, I don’t care! It’s just trying to be a comedy that gets some great real reactions out of people. It may be a little bit naughty, and not every joke hits bullseye, but it brought a smile on my face, and that was clearly the film’s intent.