My Take On Documentaries/A Study Of Film

Do I have a bias against documenaries? In my opinion there are two kinds of documentaries. There are documentaries that are meant to be informative, like Waking Sleeping Beauty, and then there are documentaries that are meant to tell a story, like American Movie. But whichever case, what is there to be said about a documentary in terms of a review? With regular movies, you can critique the acting, the script, the production design, etc. With a documentary, all that is gone. Which means the only thing you can really talk about is whether or not the subject matter interested you. And if it didn’t, well, that’s not really the movie’s fault.

I’m not usually a fan of documentaries and I’ll really only watch them if the subject matter interests me. But Film Studies brought up an interesting point – what about mockumentaries? When a movie is trying to make fun of the traditional documentary style with a narrative, does that make it comparable with narrative films? That question was brought up when we watched our film for the ’80s. 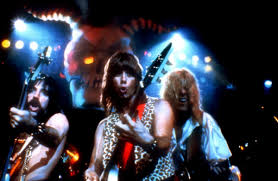 Yes, this movie was funny and as quotable as heck, but how does it compare next to traditional films with a narrative? It’s a movie I think everyone should watch at some point or another, but it doesn’t spell ‘masterpiece’ like some of the other movies I’ve reviewed. Also, the whole movie was improvised, so I can’t even complement the script. I can praise the directing and acting, but this movie clearly is in a different class from most of the movies I’ve reviewed. But still, it’s definitely worth watching.

One thought on “My Take On Documentaries/A Study Of Film”