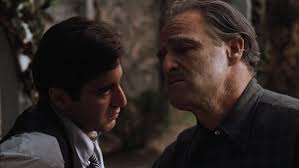 Ellen Degenres once said, “Procrastinate now. Don’t put it off.” And I’d say that the oxymoron has served me well. I can’t tell you how long I’ve been putting off seeing 1972’s Best Picture winner, The Godfather. And can you really blame me? The film is widely considered to be the greatest of the Best Picture winners, and some even call it the greatest film ever made. To me it seems like a bit of a stretch to call ‘The Godfather’ the greatest, but it’s till a strong film with plenty to offer.

It occurs to me that perhaps the main issue with the film is the fact that it’s a character based film without likable characters. Now, I understand that this is meant to be the great appeal of the film. The Corleone’s may be awful people, but they’re a family nonetheless. Sort of a more realistic Addams Family. However, unlike Citizen Kane, I’m not seeing any revolutionary cinematic techniques. I’m not seeing what’s supposed to be new or even special about the direction.

Now let’s get to the one thing everybody remembers about this movie… the performances. Marlon Brando as Vito Corleone is everything that a great performance should be. There’s just one problem. This performance that many call the greatest Lead Actor winner in Oscar history… is supporting performance. This is one of the craziest examples of category fraud I’ve ever seen. Don’t get me wrong, he is brilliant in the role, but Supporting performances are judged differently than lead ones.

The true lead of the film is Al Pacino as Michael Corleone. While perhaps not as good as Brando, Pacino does a brilliant job with his transformation that parallels his fathers in many ways. James Caan is also really good, and am I the only one who thinks Diane Keaton should have gotten a nod?

I will say, I do enjoy the film. While the direction on the film is nothing special, I do appreciate the script and the acting. Now I watched this movie with my dad for Father’s day, and he told me that, while he liked it the first time he saw it, it took him a few viewings before he truly loved it. So while I’m teetering on the edge, I ultimately decided to give the film five stars. I look forward to seeing the film again. I do appreciate the film for what it is, even if I don’t entirely agree with it’s reputation.

(If you’ve noticed, recently I’ve found that writing the synopsis has been one of the hardest parts of the review. So I’ve pretty much been abandoned the synopsis. I hope nobody minds.)