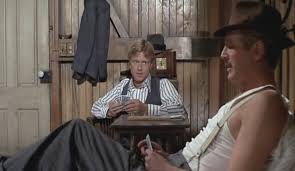 I’ve been away from these reviews for a while now. I’m not sure why, but I’ll try to see if I can get back in the game. I’ve mentioned it before, but once I finish the Best Picture reviews, I plan on doing a ‘Best Of The Best Pictures’ thing and make a list of nominations for which ones have the best director, actor, actress, and so forth. But I’ve currently seen 46 out of 86, so I’m more than halfway done! But I still have a while to go.

This is one of those films that I can tell is well made, but it didn’t really do much for me. The story centers around Robert Redford, who’s a con-man. (no relation to me, I swear) And his buddy get’s killed, so he teams up with Paul Newman and they help organize the biggest scam of their careers.

I will fully admit that I never really got into the whole ‘gangster’ thing, and in the event of The Sting, I wasn’t really sucked into the story. But do have to give credit to George Roy Hill’s direction and the screenplay is pretty decent. Probably the best part of the film is the cinematography and production design, which leaves you with a handful of memorable images

However, I guess the main problem may be that the plot is petty complicated to really understand. Granted, that may have been the intention, but I had to keep asking my dad what was going on, which isn’t the mark of a good movie.

The acting is pretty good, I guess, but nothing to write home about. Overall, the film is a really well-made film, and I enjoyed it well enough, but it didn’t leave that much of an impression on me. I’ve definitely seen better Best Picture Winners, but I’ve also definitely seen worse.

Probably the most interesting thing about this movie for me is that it has a little family history. Back in 1973, when my mom was a little girl, she moved to Ireland for a short period of time. And since this movie had just come out and was popular, the other children were like, “Oh you’re from Chicago? Are there gangsters everywhere? Do you have to carry a gun to school?” Just an interesting little story

One thought on “Best Picture Reviews: The Sting”