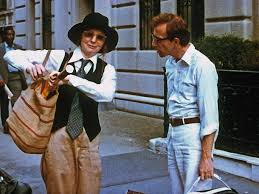 It’s so funny to look at how Oscar years change over time. Back in 1977, The Turning Point was the frontrunner to win Best Picture, and Annie Hall winning was considered a huge upset. Nowadays, people look at the lineup and say, ‘How did Star Wars not win?’ even though there’s no way the Academy would ever let that happen.

Anyway, this is the famous Woody Allen comedy. Now, I liked Midnight In Paris and didn’t like Blue Jasmine. So Woody Allen and I are pretty much even. At least, we were, before I saw this charming, funny, and surprisingly thought provoking Oscar winner.

Annie Hall, simply put, is the story of a romance. It shows the ups and downs of a relationship, as well as a glimpse inside the mind of a man like Allen, and how he sees the world. Interestingly enough, a vast majority of Best Picture Winners are adaptations, so I’m always on the lookout for original screenplays on the list. (and good ones at that) Annie Hall‘s screenplay may be the best I’ve come across in a long while.

There’s a quote midway through the film where the two arrive in California, and Keaton makes a remark about how clean it is, to which Allen responds, “That’s because they don’t throw their garbage away, they turn it into television shows.” That line alone was worth the Best Original Screenplay oscar that the film won, and don’t worry, there’s a lot more where that came from.

Of course, the screenplay is not the only thing in the film that works. Any romance would fall flat without two strong actors, and Woody Allen & Diane Keaton have perfect chemistry. True, they were dating in real life at the time, so one does wonder how much of their performances are actual acting. But that doesn’t change the fact that Allen is very likable in the lead role, and Keaton truly excels at being funny, yet hitting the dramatic beats when necessary.

At first, I did have a problem with the editing. There isn’t a lot of breathing room in between the dialogue. But the more I thought about it, the more I realized it helped with the film’s style. The editing choices, dialogue, and fourth wall breaking set the film in a world not entirely our own. And yet, Allen knows how to use this to his advantage. In fact, I wouldn’t be surprised if the film’s structure and tone helped to inspire Eternal Sunshine Of The Spotless Mind (another great film.) Annie Hall is one of the more pleasant surprises of the Best Picture quest, and I’d rank it in the top five, among the very best.