Sunrise: The OTHER Best Picture Winner 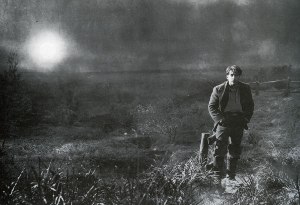 1927 was the first year in the history of the Academy Awards. As such, the rules were awfully different back then. For starters, there were two Best Picture winners. Best Production went to Wings, which I’ve already reviewed but Best Unique or Artistic Production went to Sunrise.

Guess which one is the better film.

While Wings was a great film for the silent era, Sunrise is a great film, period. This film doesn’t rely on dialogue. And yes, it’s a silent film, but there’s not even that many title cards. Much of the film is just told in images. And it’s so refreshing to see. It’s like a children’s picture book, most of the story is just told through images, which are captured brilliantly by cinematographers Charles Rosher and Karl Struss.

One thing I love is when movies keep it simple. If this movie were made today, they would boggle down the film with a ton of sub-plots. But this keeps the action very contained, focusing on the character arcs of the Man and the Wife, both brought to excellent life by Edmund O’Brien and Janet Gaynor, both proving that silent films can produce some great performances.

I saw the film online, at this link. If you’re a film fan, I would highly recommend checking this out. It’s very easy to follow along, but never boring. A true masterpiece of the silent era.

One thought on “Sunrise: The OTHER Best Picture Winner”