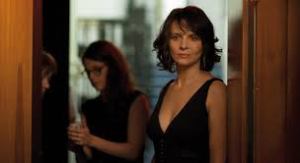 Well, it’s that time of year where some movies from the beginning of the year start appearing in my local library And Clouds Of Sils Maria is one of those movies. After hearing some good reviews, I decided to watch it.

And the end result was… disappointing, to say the least.

The premise is solid, and the script is semi-decent, but director Oliver Assyas doesn’t seem to know what direction he wants to take the story in. And the editing might be some of the worst I’ve ever seen. There are times where it’ll just fade to black at moments that seem like they’re interrupting the scene, often while a character is speaking.

The best part of the movie, as it rightfully should be, is Juliette Binoche. It’s not a ‘omigod look at this’ performance, but she does her job fine enough and makes the character of Maria believable, even if nothing else is. Chloe Moretz also impresses in a small role.

But what really irritates me is Kristen Stewart’s performance. People are saying this is her best performance to date. First of all, it’s not. Second, she does nothing in this movie. She’s the assistant, she reads lines opposite Binoche, and the few times she does have a serious scene she completely underplays it. I’m not even kidding when I say that I’ve seen nine movie this year, and in Supporting Actress, Stewart doesn’t even make my top ten.*

I like aspects of it. Binoche and Moretz were good, the script is decent, and I do like the cinematography. It’s not the worst movie you could see, but it’s certainly no masterpiece. I wouldn’t even call it good.

*My top five in Supporting Actress as of right now: Cate Blanchett, (Cinderella) Cara Delevigne, (Paper Towns) Kaitlyn Dias, (Inside Out) Julia Garner, (Grandma) & Phyllis Smith. (Inside Out) And that’s not even counting Ashly Burch (Life Is Strange) who’s not eligible, but if she were, she would win by a mile.