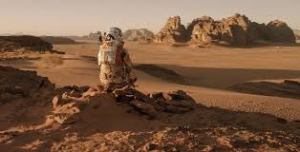 While Ridley Scott did at one time direct movies like Alien and Blade Runner, his credibility in Hollywood has been diminished somewhat by Robin Hood, Prometheus,The Counselor and Exodus: Gods & Kings – all movies that underperformed. So when I initially heard about this movie, I rolled my eyes. Surely people weren’t gonna be suckered in by Ridley Scott again.

Then reviews started coming out. And they were overwhelmingly good. This got me curious – curious enough to see the film myself. But this movie ended up completely surpassing my expectations.

From what I understand, the book’s author took great care to make sure that everything that happens n the story could theoretically happen in real life. I may just be your average movie critic (to be fair, I think I’m better looking than most) but this film did manage to look both accurate and super cool.

What sticks out about the film is the visuals. I don’t know where they filmed this and I don’t know hoe much CGI extension was used, but it feels like the real Mars. The visual effects are very convincing as well, especially in any sequence involving CGI. To the pint where I’m starting to feel that this film is a threat to win the Best Visual Effects Oscar.

But a one-man show like this is only as good as the one man himself (or woman as the case may be.) Now while I’ve never been a huge fan of Matt Damon, he really surprised me here, successfully pulling off the charm and humor of the character but when called for, he shows he can handle dramatic scenes very well.

The remainder of the cast is all excellent, including Chiwitel Ejiofer, Jeff Daniels, and Jessica Chastain. (I’ve now made it a goal to see Jessica Chastain get an Oscar one day.) What really surprised me was Ridley Scott’s amazing direction. It seems all he needs is a good script, something that was lacking in Gladiator, but is in full force here.

The Martian is a fantastic film. Think of it as the love child of Gravity and Interstellar. And if you get the chance – see the film in 3D as it’s one of those films that benifits from the extra dimension.

The Martian: The movie that made science cool.