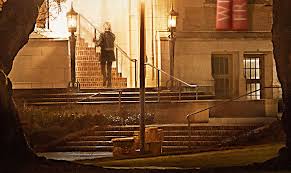 None of these films have any other nominations. I haven’t actually seen any of these movies, but I have listened to all of the songs. Links to the songs will be provided. And I have to admit, this is a pretty weak year for Original Song.

Does anybody actually care about this song? It sounds nice, but it was a HUGE surprise on Oscar nomination morning. The HUGE surprises never win this award. Besides, there’s another documentary song with a better chance.

“Earned It” from 50 Shades Of Grey

Calling 50 Shades Of Grey an Oscar Nominee is weird enough. Calling it an Oscar Winner? No. Just… just no. Maybe if ‘Love Me Like You Do’ had gotten on instead…

At least a few people know about this movie. But… it’s opera. Do they ever give a song like this the win? I can barely make out the lyrics, and it’s not even catchy. Really, only two songs have a real chance at winning.

“Writing’s On The Wall” from Spectre

This is the most popular song in the category, and it won the Golden Globe. But somehow, I don’t think it can win here.

“‘Til It Happens To You” from The Hunting Ground

What a powerful song. While the documentary is about sexual assault on college campuses, the song itself doesn’t strictly mention the topic, so it could be applied to anyone who’s suffering, and the nasty side effect of isolation that comes along with the suffering. Plus, It’s Lady Gaga, and she’s made this song popular. She even sung it at the PGA, which is a big indicator that people like the song

Here’s my ranking of the nominees.