Hit Me With Your Best Shot: Zootopia

So, I’ve been aware of the ‘Hit Me With Your Best Shot’ feature done at The Film Experience for some time now, but I’ve never participated. But when I heard that the next film on the list was Zootopia, I thought it was time to try it.

NOTE: I will include spoilers for the film.

When you think of Zootopia, the cinematography is not the first thing to pop into your mind. In fact, when I first heard that The Film Experience was going to be covering this movie, I thought, “Are you serious? It’s obvious what the best shot is.”

But, upon re-watching the film, there are a handful of impressive shots that I could potentially pick. Unfortunately, I’m not really able to screen-grab right now, but here are two shots that I found online that I came close to choosing.

Consider this my bronze award. This shot is the perfect blend of composition, lighting, and emotion. Any shot done in profile is bound to get my attention. From a technical perspective, this may be the best put-together shot in the film.

Consider this my silver award. This moment is what seals the deal on the film’s best scene. The slow realization on Nick’s eyes mirrors the audience as we realize that Judy might not be as innocent as she thinks she is.

But for me, there could only be one choice. 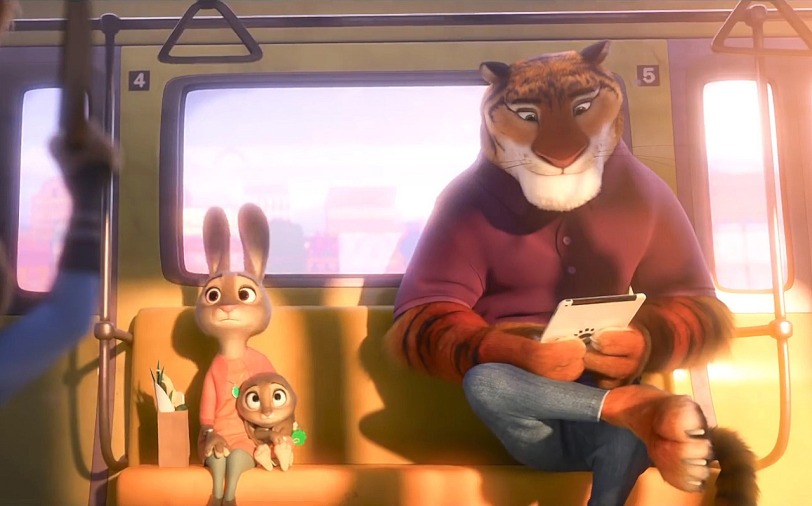 On one hand, what’s going on here is very simple – a tiger comes to sit down next to a female rabbit and her child, and the paranoid mother pulls her child away. None of these three characters are ever seen again. But despite how simple it is, and how brief it is, it still manages to be the defining moment of the film.

The mother, while clearly prejudiced herself, is also filling her child with irrational fear. (The child doesn’t seem scared of the tiger until their mother pulls them away.) It’s simple, casual racism that the tiger doesn’t even seem to notice. And the worst part is, this kind of thing is happening everywhere. Not just in the movie, but in real life.

Here’s the thing about Zootopia – the story and characters are enough to make this a good movie on it’s own. But when you look past that and you see the allegorical elements that are everywhere, it becomes apparent that this movie is so much more than just a cartoon for kiddies. If anything, the movie is more for adults than it is for children. There are so many moments like this that are guaranteed to sail over young viewers’ heads.

For most of the movie, the prejudice is kept very fluid. But when we enter the final third, we get a very clear picture of predators and prey. Black and white. Which is exactly what the villain of the movie wanted. Bellwether’s plan is to rule through fear. To go back to a time when the world was divided in two. To make Zootopia great again.

While there were plenty of parallels to real world prejudice prior to this scene, this is the moment that makes us finally realize, “Holy sh*t. This is the world we live in.”

And only one question remains; what are we going to do about it?