Both of these movies are nominated at the Gotham Awards, and both of them are streaming on Amazon Prime. Also, both of them feature some strong work by black talent. So, I decided I should watch them. But the real question is, should you watch them?

Sometimes, a great move can be completely ruined by the final minute. Unfortunately, this is the case with The Fits. The film starts out incredibly promising, with remarkable use of the ‘show, don’t tell’ rule. The cinematography is stunning, and actress Royalty Hightower really puts her all into this role. But the ending is so disappointing it basically kills everything the movie had going for it. 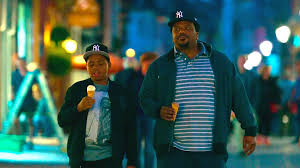 This film is basically an average ‘fish out of water’ story, the kind you would see on Disney Channel, except with a lot of swearing. There’s nothing especially outstanding about this simple fish out of water story, with the exception of one element: Craig Robinson. For an actor mostly known for his comedy, he does a great job in a very understated dramatic role. I hope he gets more mentions for Supporting Actor. But outside of him, the film is fairly average and forgettable.