So, I was left in a bit of a tizzy after the election results were announced just over a week ago. Seeing movies has been a good distraction. As of now, I’ve seen three movies since the announcement. But I haven’t been able to keep up with my blog. Well, hopefully I can change that.

The first film I saw was Everybody Wants Some. And honestly, I don’t need to devote an entire review to that film. I could probably sum up my opinion in one paragraph. 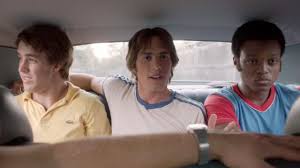 The film is basically just two hours of college guys acting like college guys. And that’s pretty much it. Granted, the film probably has a ton of nostalgic value for anyone who went to college in the 80’s. That’s probably the reason why it’s gotten such strong reviews. Outside of that, it’s got some nice dialogue, but there ultimately didn’t seem to be much of a point. For a millennial like me, it just felt like a chore to sit through.

So, here’s the deal. The two other movies I’ve seen are Arrival and Swiss Army Man. And I have quite a lot to say about both of those movies. And on top of that, I’m seeing Loving tomorrow and I’ll probably be seeing Manchester By The Sea and Fantastic Beasts shortly after that.

In short, expect a LOT of reviews to go up this week.

3 thoughts on “A quick update.”