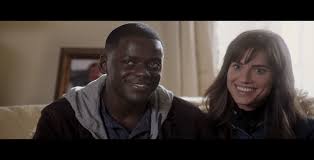 So, I usually don’t see horror films. For the longest time, it just seemed like such a niche genre. Why bother seeing something if it’s just going to scare you? But recently, it’s become clear to me that there’s a right way and a wrong way to do horror.

Here’s the secret: Good horror films are horror by happenstance. They’re not trying to scare the audience they’re trying to tell a good story, and if the audience can’t handle that story, too bad. Good horror has to have a solid basis in reality to be effective.

And this is why Get Out succeeds as a film, but also why I find it just the teensiest bit overrated.

Now before you all go nuts, I want to make it very clear that this is a very good filim. I just don’t think it’s more worthy of a ‘Best Picture’ nomination than Logan is. I understand that not every film I see is going to be for me. Much like Moonlight, this film is trying to convey the Black experience. And being Caucasian, I will never fully understand what it’s like.

Perhaps the main reason that the film didn’t resonate as strongly with me as it did with so many others is because it is largely based in satire. Being semi autistic, satire is always a concept I have been unable to embrace fully.

But with that being said, I enjoyed this film. A big reason for that are the performances by Daniel Kaluuya and Allison Williams, both of whom do a great job in their respective roles. I also thought that the screenplay can be very clever at times, with several smart uses of foreshadowing.

I think that this film is a very effective horror film with solid direction by Jordan Peele. It’s also offers up an interesting perspective on racism that isn’t seen too often in today’s media. But let’s be honest, If you want a smart and well thought out commentary on race relations and prejudice that actually warranted Best Picture consideration, you’d be better off with Zootopia.