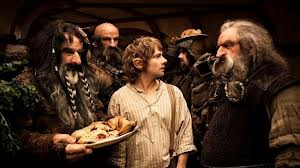 What can you say about The Lord Of The Rings? It’s one of the biggest geek-phenomenons of all time, and with all the popularity, Peter Jackson had to be the one to direct The Hobbit. Even though J. R. R. Toilkein’s original novel came out first, It’s pretty much a rule that you can’t watch this movie without watching the other movies. Well, guess what! I broke my own rule! Yeah, I guess I’ve just never got around to it and now that I’m doing Best Picture Reviews, I guess I just thought it wouldn’t feel right to watch Fellowship and Two Towers and then wait to see Return Of The King. So… The Hobbit! Right! Let’s talk about it.

Bilbo Baggins (Martin Freeman) is picked to be the fourteenth member of a group of dwarves led by Gandalf (Ian Holm). He eventually decides to join and so begins an epic story that’s so epic that we have to squeeze it into three movies!

Okay, let’s get to the bottom of this. Harry Potter=Needed To Do It. Twilight=Did Not Need To Do It. The Hobbit=REALLY Did Not Need To Do It. It feels weird to judge an epic movie for being too epic, but that’s what this is. But for as much padding as this movie has, it’s good padding. For my introduction to Middle Earth, it’s pretty darn good. The backstory and tone of this movie gets me very invested in this world. I don’t really know how much I can praise the art direction, costume design and visual effects seeing as how they were done before, and much more scuccesfully. If there is one thing I can praise, it’s Andy Serkis’ performance as Gollum near the end.

So, yeah. This is one biased review. Much like Gone With The Wind, the main flaw with this movie seems to be it’s run time. I can say I’m REALLY looking forward to watching the LOTR movies when the time comes. But as for The Hobbit, it’s the perfect example of too much of a good thing.