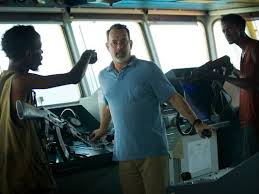 Tom Hanks’ last oscar nomination was for Cast Away back in 2001, and since then, he hasn’t had much luck with the academy. 2013 seems to be his comeback year, and I expect it to bring him his 3rd oscar, either for Captain Phillips or Saving Mr. Banks. Looking at this film alone, I think Hanks is oscar worthy, but is the film itself?

This movie reminded me a lot of Zero Dark Thirty. The whole thing is shot like a documentary. To be fair, the crew attempts to make it seem more like a story. than Zero Dark Thirty did,  but it is paced rather slowly and isn’t as gripping as some reviewers would lead you to believe. Also, I think the cinematographer had a muscle spasm or something, because there isn’t one still shot in the entire movie.

But, similar to Zero Dark Thirty, the film is anchored by the lead performance. Tom Hanks is wonderful in the lead role, and has a great scene near the end. On a side note, Barkhad Abdi might be a serious Supporting Actor contender this year. The film also has a great score and a pretty good sound mix, and the editing isn’thalf bad either.

Overall, Captain Phillips may not be a wonderful film, but t is an enjoyable film that I’d recommend watching at least once. Although, I wouldn’t see this in theaters. Personally, I’d wait until this comes out on DVD and BluRay. So, that’s my take on Captain Phillips. Enjoyable, but not Gravity.