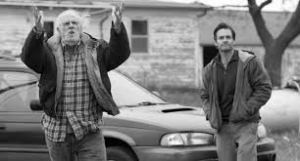 It’s funny, because this is one of those movies that everybody was talking about and I didn’t see the appeal of. I mean, okay, it’s directed by Alexander Payne, but Labor Day is directed by Jason Reitman, and I don’t see anybody going gaga over that movie. But everybody kept telling me to see it, so I threw my hands up in the air and popped in the screeners copy. And wouldn’t you know it, I was pleasantly surprised by Payne’s latest.

Woody Grant (Bruce Dern) gets a letter in the mail saying “You Won A Million Dollars! No, Really! Also Carrie Underwood Was A Good Casting Choice For The Sound Of Music Live!” Although his wife Kate (June Squibb) and son Dave (Will Forte) try to talk some sense into him, Woody is convinced that he is a millionaire and he wants to travel to Lincoln, Nebraska to claim his money. Eventually, Dave agrees to take his father there to shut him up and so that maybe they can spend some quality time together.

This, to me, is what Amour should have been. What stands out the most for me is the screenplay. Screenwriter Bob Nelson is going places, because the dialogue in this movie is both brilliant and realistic. But what makes it even better is Alexander Payne’s treatment of the script. Much like The Descendants, Payne gives us believable interpretation of life that doesn’t feel false. While I don’t want to say too much about the story for spoiler reasons, I believe that the movie shines because of the story, and Payne knows that.

Of course, a director is only as good as his cast, and the film’s main three players do a wonderful job. Will Forte brings an enjoyable and believable performance, and June Squibb brings a charming amount of comedy to the film (Although the film is mostly dramatic, I don’t think the Globes got it right.) But let’s get to the one that everyone wants to hear about. Bruce Dern is amazing. As the film goes on, he just gets better and better, particularly a heartwarming scene near the end. I’m still going to vote for Ejiofer, but I’ll be satisfied if Dern wins. (Dern himself doesn’t care.)

Lastly, there’s the crew. I must admit, I’m not exactly sure why the film was shot in black and white, but it looks beautiful. The score is also very good, and the remainder of the crew pull everything together nicely. But it’s not the crew that you will remember going out of this movie, but the story and the characters. And that’s exactly what a good movie should do.

One thought on “2013 Movie Reviews: Nebraska”