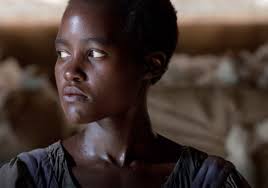 It’s possible that I ‘ll see August: Osage County before the ceremony, but, as I previously stated, what films I see before making predictions isn’t really relevant. And besides, this is clearly a two-woman horse race.

First, we have Sally Hawkins in Blue Jasmine. Now, Hawkins’ character Ginger is basically the straight man to play off of Blanchett. She’s not bad in the role or anything, but I highly doubt she will get enough votes to come anywhere close to winning. She’s certainly too subtle to knock out the competition.

One performance that isn’t subtle is Jennifer Lawrence‘s turn as Rosalyn in American Hustle. Easily the best thing about the film, Lawrence is loud, proud, and playing to the crowd. If she hadn’t won just last year, she would easily be the frontrunner here. But as it stands, isn’t Lawrence a little young to be a two-time Oscar winner?

And now we come to Lupita N’yongo in 12 Years A Slave. I knew the day I saw the film that Lupita was winning an Oscar, and my mind hasn’t changed. In a year filled with powerful performances, Lupita grabs you by the throat and never lets go. It’s exactly the type of performance they go for, and It’s in a film they’ll want to reward somewhere. She needs to win.

Then we have Julia Roberts in August: Osage County. This is her fourth overall nomination, her first since Erin Brockovich, and some say her best performance since said film. She already has an Oscar, and I don’t think she’s winning. True, Weinstein’s backing, but I don’t think they’re pushing very hard.

Finally, we have June Squibb in Nebraska. She plays Woody’s wife Rose, and to be honest, I don’t see anything awards-worthy here. She just swears and calls people sluts (Or as I call it, Jack@$$: Bad Grandma) And while the Academy certainly likes the film, I don’t think it will win here. I think the support is behind N’yongo, and for good reason.

And, for recollection, here are their Oscar scenes.

Hawkins: The supermarket scene
Lawrence: The bathroom scene with Amy Adams
N’yongo: The soap scene.
Roberts: Uh, I haven’t seen it. I’ll say, “Eat the fish, b*tch” (Update: The scene in the car with Abigail Breslin)
Squibb: The restaurant scene with Bruce Dern