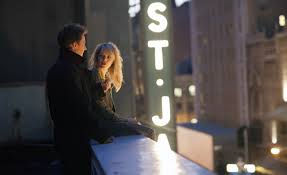 This category seems to be relatively set in stone. Let’s get right into it.

This is Dick Pope’s second Oscar nomination, previously being nominated for The Illusionist. The film’s four nominations show it is remembered, but I don’t think it’s going to walk away with any Oscars. Sorry, Dick. At least the mispronunciation of your name became a meme for a while.

4th Most Likely To Win: Ida

People will vote for this, because it looks beautiful. But really, when was the last time a black-and-white film won this category? I’ll tell you, back in 1993 with Schindler’s List.

3rd Most Likely To Win: Unbroken

I’ll tell you this, I would probably vote for this film. And I haven’t even seen it! That’s because Roger Deakins was the DP for Shawshank Redemption, Fargo, No Country For Old Men, among others. This guy deserves to have an Oscar on his mantle. I want this guy to win an Oscar, I don’t care what movie he wins it for as long as he wins. And I’m sure there are plenty of Oscar voters who have that mindset. The problem is, the film wasn’t very well liked.

2nd Most Likely To Win: The Grand Budapest Hotel

It’s one of the two Best Picture nominees in this category. Not since 2006 has a film won Cinematography without a nomination in the top category. Wes Anderson’s films have very distinctive cinematography, complete with 90 degree pans, long tracking shots, and symmetry in just about every shot. If Oscar voters are fond of Anderson’s style, they might choose to reward it here. However, this category’s winner has been sown up for a while now.

From the moment it was announced that this film was going to be one continuous shot, it jumped to the top of this category. Now, the technique itself has been used before in films like Rope and Russian Ark. But because of how good the film is, the shot doesn’t seem like a gimmick. The technique pulls us into the film, and considering the fact that the film is a huge Oscar player, it seems like the easy winner here.

My Personal Ranking of The Nominees