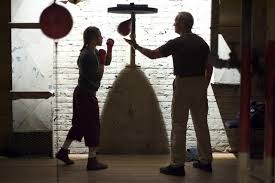 Ah, Clint Eastwood’s Million Dollar Baby. At 74, Eastwood became the oldest person to win the Best Director oscar. This film is very traditional in the sense that it’s a sports movie, biopic, and Oscar-bait drama all rolled into one. And yet, somehow, it all comes together and delivers a very entertaining movie.

I feel that the film works for two main reasons. One is the writing. I really get a sense that these were all real people in a real situation and that’s largely due to the wonderful dialogue. I also got a sense that the characters meant what they said, but that might be due to the film’s other main selling point: the acting.

Hilary Swank is just wonderful in this role. She puts so much passion into her character that it’s hard not to root for her. (Although just to clarify, she shouldn’t have won over Kate Winslet. No way.) The film also has some solid performances by Clint Eastwood, Morgan Freeman, Margo Martindale and Jay Baruchel. (Hiccup, before he traded in good writing for good looks.)

A very good film. I’m not giving it five stars because I’m trying to only give those to films that really deserve it. And this film was admittedly a little too cliche for my taste. But I did enjoy it a lot, so take that for what it’s worth. But hey, maybe it’s just the fact that Morgan Freeman narrates – something that automatically boosts the quality of any film.