The Best Of The Best Pictures – Best Sound Editing

Best Sound Editing is arguably the weakest category on “Best Of The Best Pictures”. That’s because the kind of films that require a lot of creative sound effects (action, sci-fi, animated) don’t usually win Best Picture. Plus, this category is actually pretty recent, so a lot of Best Picture winners didn’t have a chance to be nominated here.

First, the films that didn’t quite make it.

That chariot race… but how much of those sound effects were real?

9.) The Bridge On The River Kwai

That scene at the end. You know the one.

It sounded great, but how much of it was recorded live?

7.) From Here To Eternity

That climax was just incredible, especially those planes

And now for my top five. Only one of these films got an Oscar nomination (it won.) while the rest were either snubbed or released in a time before this category existed. In alphabetical order, here are the nominees.

“ALL QUIET ON THE WESTERN FRONT”

For a film released in 1930, when sound was brand new in motion pictures, this movie goes all out there. It might not sound the best by today’s standards, but the fact that it even makes my top five (which admittedly is not the strongest top five) is pretty impressive.

“THE LORD OF THE RINGS: THE RETURN OF THE KING”

Perhaps the explanation for this film’s Oscar snub was the fact that The Two Towers won this category the year before, as well as a general feeling that this film was winning EVERYTHING. But when you consider the fantasy creatures, the battle scenes, and the general ambience of this film, you can see why it makes the cut.

There actually was a Sound Editing category in 1986. The nominees were Aliens, Star Trek IV, and Top Gun. How this film missed the cut will remain a mystery, as the sound design is extremely effective in bringing you into this film and planting you right in the middle of the Vietnam war.

The sounds of the ship are very effective even before the iceberg enters the equation, Once it does, the sound perfectly helps to enhance the action and truly makes you feel like you’re on the ship as it sinks. Being the only film in my top five to have actually won the Oscar certainly helps. 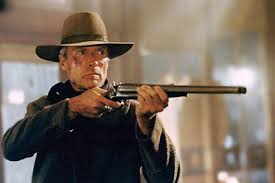 “The sounds of the wild west are perfectly captured here, mainly the gunfire. There’s not a whole lot of it, but it’s well done and makes the cut. Wasn’t nominated oddly enough, I can’t explain that.

As a side note, this is gonna start appearing at the bottom of the posts. This is to help you keep track of the nomination tally.