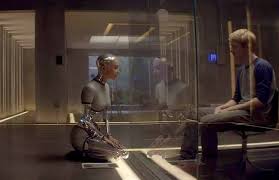 So this is the time of year where some movies from early this year begin to come out on DVD, and when I saw Ex Machina sitting on the shelf at my local library, I knew I had to check it out. This film is the directorial debut of Alex Garland, and I have to say I’m impressed by what he’s done and I’m excited to see what he does in the future.

Let me start out by saying you can’t just put this movie on in the background while you do something else. No, you really need to pay attention to everything that happens. There are a lot of intellectual questions and deep thoughts about man and machine. This is one of those movies that really makes you think. If that’s your thing, then you’ll definitely enjoy this movie.

If it’s not, then you should probably check out something else.

The technical quality is very impressive in this film. The production design is amazing. The design of Nathan’s mansion is in equal parts cool and terrifying. The cinematography is great, and Ava’s character design is amazing to behold and brilliantly realized by the VFX team.

One of the best things about this film is Alicia Vikander. She is absolutely mesmerizing in this role, and has a difficult role to play – you’re never entirely sure whether Ava is being honest or not. Domhnall Gleeson and Oscar Isaac are also very good in their respective roles, and the actors do a good job acting off of one another.

It’s a very odd movie. When it was over, I was scratching your head wondering what in the world I just watched. But after I mulled it over for a little while in my head, I realized I liked it. Other people might come to a different conclusion. It’s definitely not for everyone,and I can’t guarantee that you’ll like it. But I can guarantee that after seeing the film, it won’t be leaving your head any time soon.