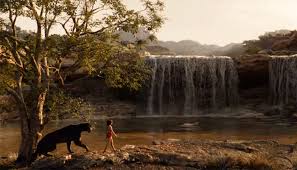 I’ll openly admit, I was never that big a fain of the animated Jungle Book movie. I like the premise, and there’s some great animation and neat songs but I thought that Disney’s execution of it was a bit too juvenile. But for some reason, this remake looked really good. All of the trailers for this were just incredible, and the all-star cast they had gathered seemed awfully impressive.

Let me start out by saying this: This is one of those ‘experience’ movies. If you have any intention of seeing this, I strongly recommend NOT waiting for the DVD. The story, just on it’s own, is fairly standard and straightforward, but the look and feel of the movie is just spellbinding.

I’m calling it right now, this film will win the Best Visual Effects Oscar. The visuals in this movie are absolutely outstanding. Not only does everything look real, but it also retains the same feeling as classic Disney animation. I’ve always liked Jon Favreau as a director, and he really steps up his game for this one, essentially transporting his audience inside a Disney movie.

And let’s be honest, who doesn’t want that?

The rating is tough for me. If you see it in IMAX 3D, it’s probably a five-star experience. If you wait to see it on DVD, then it’s more like four stars. So I’ll split the difference.