Recently, on the Ellen DeGeneres show, she told her viewers that she just went to the first private screening of Finding Dory, before any of the critics have seen it. And keep in mind that Ellen DeGeneres is basically the embodiment of everything that is good in this world. So, what did she think about it?

That’s some pretty high praise. For a long time, I considered Finding Nemo to be the best film Pixar had ever made, until Inside Out changed my mind. But Nemo is still a brilliant film, and it was truly robbed of a Best Picture nomination back in 2003.

When talking about voice over performances that were ignored by the Academy, Ellen DeGeneres in Finding Nemo is one of the most talked about snubs. While the performance is largely a comedic one, we get a few hints about how lost and alone her character is, which ultimately culminates in… this scene. Man, she should have gotten nominated for that scene alone.

Initially, I wasn’t sure what to think of Finding Dory. The first film centered around the father/son relationship, and Dory is clearly a supporting character. (Ironically, back in 2003, Disney foolishly campaigned DeGeneres in the lead category, which might have cost her the nomination. Now that she actually is the lead, and she’ll likely have some strong scenes, only time will tell if she’ll make even a tiny dent in the Best Actress race.)

But when you think about it, it does make sense. The first film was about a father searching for his son, and the sequel is about a daughter searching for her parents. And with Ellen’s praise, this movie could really turn out to be something special. I just really don’t want to get my hopes up and then have this end up like How To Train Your Dragon 2. (I don’t care what anybody says, I hate that movie.)

But, let’s just say that the movie comes out and it turns out to be incredible. The next logical question becomes: what are its chances with the Oscars? It’s possible that Best Animated Feature might become a very tough race between Finding Dory and Zootopia. But the real issue for me is that if there’s no general consensus as to which of the two is the better film, then neither one will end up as a Best Picture nominee.

I already did a post about how Zootopia‘s chances in the top category. Now, the buzz for the film has subsided a little bit, but the same thing happened with The Grand Budapest Hotel. If Finding Dory ends up being loved by critics, Disney will have to decide which movie they want to campaign in the top category. After all, I don’t think we’ve reached the point yet where we can have two animated films nominated for Best Picture in the same year.

For now, all we can do is wait for Finding Dory to come out. So we can look at this from a fair perspective. Until then, please enjoy this photoshop that I made. 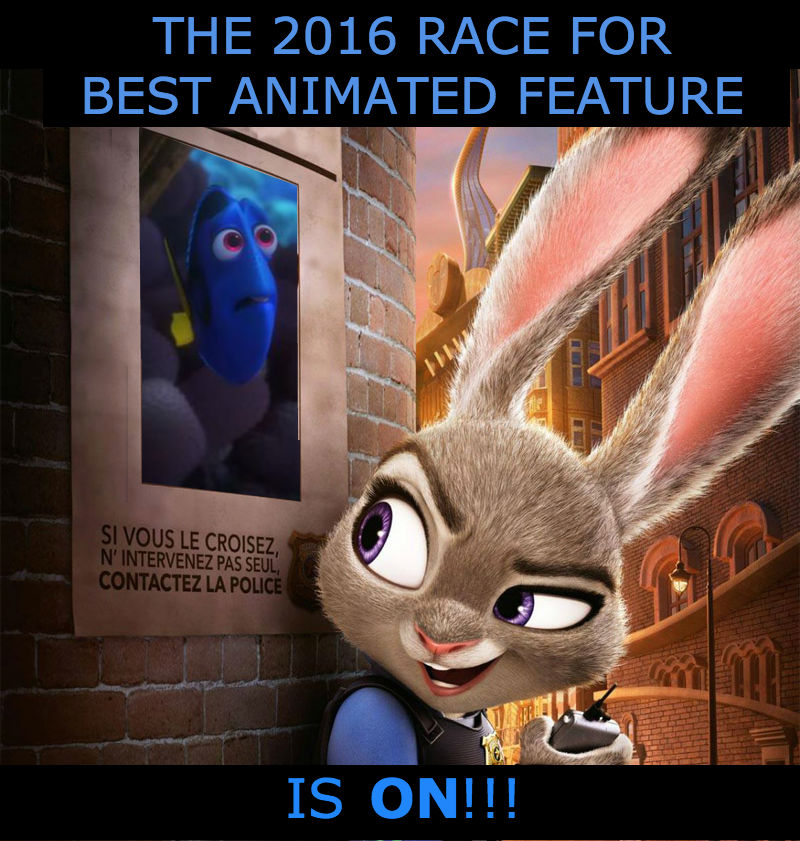