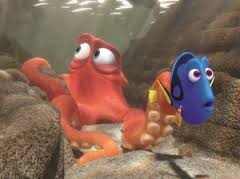 This is a tricky film to talk about. The 2003 film Finding Nemo is one of my favorite movies of all time. The news of this sequel made me excited, but also extremely nervous. Because the last time a brilliant animated film that I loved with all my heart got the sequel treatment, it didn’t turn out so well.

But unlike some sequels, Finding Dory works because it feels like it’s the same world and the same characters. Marlin, Dory, and Nemo feel exactly like they did in the first film, so the nostalgia factor is high.

However, if you even start to compare the film to Finding Nemo, there’s no comparison. Finding Nemo is the better film. The first film was essentially about parenthood, but this film seems to be more about living with a disability. And while that’s definitely a strong message, if you look at the Toy Story films, the messages in those films seemed to all connect with one another, so that the whole trilogy was one big story.

In the first film, Dory was essentially the comedic sidekick, but upgrading her to the lead meant they had to give her more of an emotional hook. It works about as well as it could have. DeGeneres’ performance is quite good, but I think she was utilized stronger in the first film.

The film could have very easily been so much worse, but the filmmakers did a really good job. And, as we have come to expect from Pixar, the animation and score are both phenomenal. As for the film’s Oscar chances, it’ll probably get nominated for Animated Feature, but if Disney is smart, they’ll focus all of their campaigning on Zootopia.

For Pixar, any movie that’s not a timeless masterpiece is considered a disappointment. It’s unfortunate, but that’s just what happens. And in all fairness, Finding Nemo is a very tough act to follow.

By the way, the 3D is good, but I’m not sure if it’s worth it because I kept having to take the glasses off so I could cry.