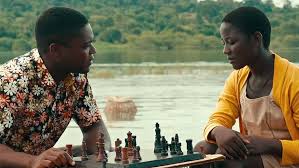 If you saw the trailer for Queen Of Katwe and thought it looked like something you’d enjoy, then you’re probably right. But if the trailer doesn’t look appealing to you, the film probably won’t change your mind. Personally, I really enjoyed this film.

The film is 2 hours long, which doesn’t sound too bad by Oscar-bait standards, but for Disney movie standards, it seems ridiculously long. The film could have used a better editor.

Lupita Nyong’o is amazing as Phiona’s mother. It’s not a ‘loud’ performance, but rather an understated one that sneaks up on you over the course of the movie. By the time the movie is over, you understand completely who this woman is.

David Oyelowo is also incredibly good – a viable Supporting Actor contender if Disney bothers to campaign outside of Nyong’o.  And Madina Nalwinga gives a strong performance that is likely to get lost in the sea of tremendous Lead Actress contenders.

It’s not one of those movies that you HAVE to see in the theater. If you wait to see it on the small screen you’ll get basically the same experience. But that shouldn’t detract from the film’s quality.

Mira Nair does a great job directing, and I hope I get to see a lot more mainstream films by female directors. There are moments that feel very standard, but for what it is, it is a very well-made film, and a very respectful look at Phiona’s life. It’s a feel-good movie, and sometimes, we all need one of those.

One thought on “2016 Movie Reviews: Queen Of Katwe”