For a while, I had Rachel Weisz pegged as a Supporting Actress contender for The Light Between Oceans . But now that I’ve seen the movie, I don’t think it’s gonna happen.

The first hour of the film is pretty slow. We have to wait through a long haul of romance and married life before we even get to the baby in the boat. And when Rachel Weisz finally enters the film, she has very limited screen time and feels so secondary compared to Fasssbender and Vikander.

The cinematography is the best thing about this movie. Adam Arkapaw does a great job, giving a lot of the shots in the film a very ‘picturesque’ quality about them.

The film in general feels very old fashioned. And I don’t just mean that it takes place many years ago, but the film itself feels as if it was made during the 1970’s. In fact, the ‘Anatomy of a Scene‘ video refers both John Cassavettes and David Lean as inspirations.

It feels very similar to something like Out Of Africa. Great cinematography, acting, and music, even if it isn’t as successful in the storytelling department. 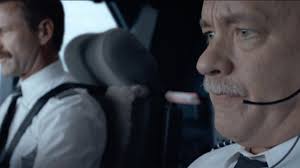 Who would have thought that an 86 year old Trump supporter could still be a really good director?

Where Sully shines the most is when they’re recreating the actual ‘Miracle On The Hudson’ event. I saw this in IMAX, and I would recommend doing the same. There are moments when it really feels like you’re on the plane.

The film falters a bit in the scenes that aren’t recreating the crash. I don’t know how much of the investigation is accurate to real life, but the way it’s written feels very ‘Hollywood.’ Actually, the script seems to be the biggest downfall of the movie., as everything else in the movie is well done.

Tom Hanks, once again, takes a difficult role and makes it look easy. Aaron Eckhart is good, but he isn’t given that much to do. And as for Laura Linney, her performance is quite literally phoned in. Why do movies insist on wasting great female talent in such low-key roles?

The film also has impressive cinematography, sound design, and editing. It’s not a perfect film, but it is a very well made movie that could easily end up as a Best Picture nominee.

One thought on “2016 Double Movie Review: The Light Between Oceans & Sully”