The SAG awards were last night, and here are my takeaways

Viola Davis and Mahershala Ali are both locked to win their Oscar. I would be shocked to see either of them lose.

Emma Stone seems to officially be the frontrunner in Lead Actress.

Denzel Washington’s win was a shocker. He just might stand a chance at the Oscar after all, we’ll have to see how it goes.

Hidden Figures winning ensemble was a huge shocker. Now that Moonlight lost, I feel safe in saying that there’s nothing that can beat La La Land.

Wait, I never got around to reviewing Hidden Figures, did I? 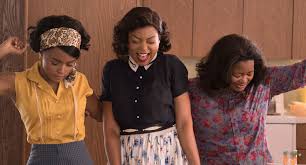 Hidden Figures is a difficult film for me to talk about. Without a doubt, this is a very important movie, and I love the fact that so many people are seeing it.

But I can’t help but feel that the hype is just little bit too much. At times it feels like a Hallmark movie. Where the film really succeeds is that it came out at a time when we needed to see this story, And even then, it’s far from the most timely film of the year. (That honor goes to Zootopia.)

The performances may not be the very best of the year, but are still fairly good. I think Taraji P. Henson is my personal MVP. And as far as the supporting ladies go, I feel that Janelle Monae had a little more to do than Octavia Spencer.

The reason I am giving this film four stars and not higher is because I don’t think the film stands out like several other films from this year do. It also feels a little too long. The film is well-made, but let’s not hype this movie up as something it isn’t.

And for the record, Moonlight totally deserved the SAG Ensemble award/