5th Most Likely To Win: “The Empty Chair” from Jim: The James Folly Story

Apparently the music branch at the academy really likes J. Ralph. He was a clear #5 last year. And he’s a clear #5 this year. It’s a song from a documentary that most people have never even heard of. And the song itself is extremely forgettable.

This will be lucky to get even a single vote. It’s not going to win. Trust me on that.

4th Most Likely To Win: “Can’t Stop The Feeling” from Trolls

We’ve all heard this song a million times, an it’s even got a handful of awards to prove for it. This will get votes because people love the song. But the problem is, nobody really seems to care about this movie outside of this one catchy song.

If this were a weaker year, this song might have had a serious chance at a win. But as it stands now, this song is easily in fourth place.

3rd Most Likely To Win: “Audition (The Fools Who Dream)” from La La Land

In any other year, this song would not be in third place. This beautiful ballad is my personal preference of the two nominated songs from La La Land. And fun fact: it’s the only song in the film that was sung live on set.

The reason I have this song in third place is because this movie has two songs nominated. And all the awards have gone to the other nominated song. People will still vote for this song, and there’s even a possibility it could win. But I wouldn’t count on it.

2nd Most Likely To Win: “How Far I’ll Go” from Moana

Best Original Song is the one category that has no problem whatsoever nominating animated films alongside live action films. If only other categories would be so inclusive… anyway, this song is from the latest Disney musical, Moana. It’s a very good song that gets multiple reprises. And Auli’i Cravalho sings it phenomenally.

The reason why this song could potentially win is because it’s written by Lin-Manuel Miranda of Hamilton fame. If he won, he would become the youngest person ever to win EGOT. And given that La La Land has the potential to vote split, i wouldn’t rule out the possibility of Lin-Manuel winning an Oscar.

AND MY PREDICTED WINNER IS; 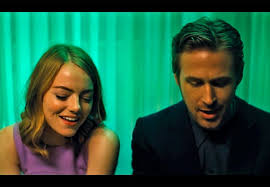 This song seems to have become the anthem for this movie. It’s a soothing tune that represents the atmosphere of the film it comes from. And considering that said film is a major Oscar frontrunner, I’d say the song is also in a good position to win.

It’s definitely not a sure thing. The vote split is a very real concern. And Lin-Manuel is just waiting in the corner for his EGOT. I’d say City Of Stars is your best bet, but anything can happen on Oscar night.