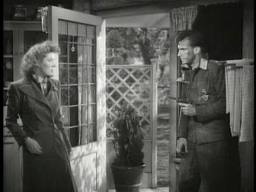 I guess that after Gone With The Wind, we all got a little hyped up over the idea of color in movies. But it looks like black and white movies were still popular, so let’s just pretend that movie never happened for the next decade. But, hey, how can I complain, as Mrs. Miniver has proven not only to be a prime example of how to make a film in general, but proves to be my favorite Best Picture so far.

Mrs. Kay Miniver (Greer Garson) is a fairly wealthy woman who lives with her husband Clem (Walter Pidgeon), and three children, the eldest of which is training for the Air Force. And just in time too, because World War II has started, and everyone, even those without uniforms, are in some way fighting for their country.

So what works with this movie? Nearly everything! This has got to be the best war movie I have ever seen, but why is that. For one, there aren’t any scenes of actual fighting on the battleground, unlike most war movies. But the fighting is only a small part of war. It’s the impact that the fighting has on everyone that truly makes up a war. And we get to see everyone’s point of view on the battle. The rich and the poor, the old and the young. Some of the lighter moments have to do with the children’s perspective on war. But the dark moments are still present. My favorite moment is a scene when Mrs. Miniver tries to calmly heal a wounded German pilot, who puts on edge but is still oddly redeemable.

The acting, particularly from Garson, is wonderful. In fact, this movie was nominated for FIVE acting awards, and boy did it deserve it. The art direction and black and white photography all manage to suck you into the world, and the final image is so profoundly beautiful that it will stay in your head for long after the movie ends. It honestly is hard to pinpoint exactly what makes this movie work, but it’s a masterpiece that shouldn’t be ignored. I strongly recommend it for anyone who hasn’t seen it.