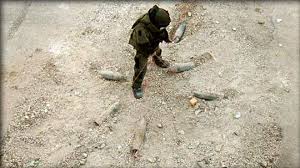 Now, I have made it very clear before on this blog that I am not a fan of war movies. But I do think that when war movies are done right, they can be very effective. And I would definitely say that 2009’s Best Picture Winner is a great example of a war movie done right.

I started thinking about what makes a war film work. And what occurred to me is what the most important aspect is: the main character should be well realized and three dimensional. This is definitely the case with Sargent James, thanks to a great performance by Jeremy Renner. This character is not your typical hero, mainly due to the amount of mystery surrounding him. He also has some strong supporting cast – watch out for Athony Mackie’s final scene.

Of course we can’t ignore the direction. This film made Kathryn Bigelow the first woman to win Best Director (and hopefully not the only one.) And I would say it’s deserved. The direction in the film is very strong and she’s largely the reason why the film succeeds.

This movie also has spectacular editing, which really takes you right into the middle of the war. The cinematography and sound design also help to enhance the experience – make sure to watch this on the biggest screen you can!

While it’s not one of my all-time favorites, (it does drag at times), The Hurt Locker manages to be an exciting and well constructed war movie that I would recommend. Not entirely five stars, but awfully close.