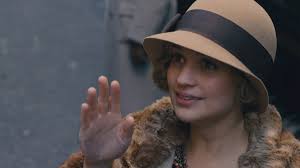 There’s already been a lot of controversy about Rooney Mara and Alicia Vikander getting nominated in this category, despite the fact that both of them are leading players in their movies. Unfortunately, one of them is likely gong to win for Best Supporting Actress, which is a nice little hint in regards to what is wrong with the Academy.

5th Most Likely To Win: Rachel McAdams in Spotlight

McAdams is the only one from a Best Picture nominee, so you might think that she has a good chance to win. Unfortunately, her role is the slightest of the nominees. This just doesn’t feel like a winner to me. Just somebody who gets nominated along with their film.

4th Most Likely To Win: Jennifer Jason Leigh in The Hateful Eight

She’s a beloved actress who’s making a bit of a comeback in this Tarantino flick. I’ve heard a lot of good things about this performance, but like McAdams, she’s the only female in a cast dominated by men. Plus, her movie has gotten very divisive reviews.

3rd Most Likely To Win: Rooney Mara in Carol

Category Fraud Part 1. Rooney Mara’s co-lead performance is great in the movie. The problem is the Academy really doesn’t seem to like Carol. Plus, Rooney Mara hasn’t won anything major. It’s a great performance, but I just don’t think this is winning.

2nd Most Likely To Win: Kate Winslet in Steve Jobs

Look out now, because Kate Winslet has both Globe & BAFTA wins. However she’s also the only person here who already has an Oscar. And Steve Jobs has been underperforming a lot this season. A win for Winslet is certainly possible, but I’m not going to predict it.

MY PREDICTED WINNER: Alicia Vikander in The Danish Girl

Category Fraud Part 2. Vikander seems to be the new it-girl. And between this and Ex Machina, she has already proven herself to be an incredibly versatile and talented actress. While the film itself may have underperformed, Vikander won SAG and BAFTA for her work, and the role seems custom-made for a Supporting Oscar win (although she actually is lead in the movie.) In the end, this is the tightest race of the four acting categories, but I’m placing my bet on Vikander.

I’ve seen four of the five nominees. Here is my ranking;

Mara: “I’ve never been more awake in my life.”
McAdams: “We’re gonna tell this story, we’re gonna tell it right.”
Vikander: “I need to talk to my husband.”
Winslet” “Fix it or I quit”

A review of The Danish Girl is coming soon.