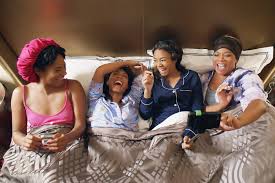 Okay, so in the next couple of months, I’m going to be seeing a lot of movies so I can catch up. Girls Trip is a movie that I had no interest in seeing when it first came out, but after a while, people started talking about Tiffany Haddish, and comparing her performance to Mellisa McCarthy in Bridesmaids. So, I decided to check it out.

Unfortunatley, the film wasn’t really my cup of tea. It’s an R-rated comedy, and it can get pretty raunchy. If you’re into those kind of comedies, you’ll probably enjoy this film just fine. But for me, the raunchy scenes were almost unwatchable.

Tiffany Haddish is undeniably the best part of the movie. Her character is not written terribly well, but she has a very expressive face and a great sense of comedic timing. While I ultimately don’t think she’ll be nominated for an Oscar, I do understand the argument.

But even Haddish is occasionaly brought down by weak material. The first two acts of the film throw these women into one comedic sitaution after another, and while these women are often able to make the writing seem better than it really is, sometimes the writing is so bad even they can’t save it.

But I think the real problem with this movie is the tone. While it tries to be a broad, laugh-out-loud comedy, we get a few dramatic scenes that come right out of nowhere and don’t mesh in with the comedic scenes at all. At first, this isn’t too bad, but once the third act begins, the film tackles some pretty heavy subjects, and it feels like we’ve been dropped into a completely different movie.

The irony is that the dramatic scenes are considerably more competant than the comedic ones. Regina Hall’s character gives a big speech at the end of the movie that I think is a legitemately good speech. I almost wonder if this movie would have been better off as a dramatic comedy, rather than a straight comedy.

If the film took itself seriously for the entire runtime rather than just a third of the time, then maybe we could have had a stronger film. It’s far from the worst comedy I’ve seen, and Tiffany Haddish does give a good performance. But I really wouldn’t reccomend this one.