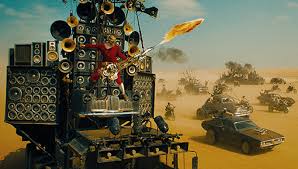 Now this is an interesting category. Four of these nominees feel like something that could win in a different year, meanwhile one of these films is a relatively obvious frontrunner. So, let’s dive right in.

5th Most Likely To Win: Sicario

4th Most Likely To Win: Star Wars: The Force Awakens

3rd Most Likely To Win: The Martian

This movie has a really great sound design, and it would personally be my vote. I’d love to vote for it here, as the sound design is really great and vital to the movie’s success. However, it seems that most of the technical categories this year are going to come down to two films. The Martian is likely to get lost in the shuffle in quite a few categories.

2nd Most Likely To Win: The Revenant

Because you know it’s all about that bear, ’bout that bear. It’s a top Best Picture contender with a noticeable sound design. I think this film has a much better chance of winning Sound Mixing than in this category. It won’t be a huge shocker if it happens, but there seems to be one clear frontrunner in this category.

This is about as clear a winner as you can get. A Best Picture nominee that everyone loves that has a lot of guns, car engines and explosions. It won BFCA and it will likely win BAFTA. While the other four films do have a chance, I can’t really imagine any other film winning except for this one.

I have seen four of the five nominated films. Here is my ranking